Before You Get Started

Recently I wrote about how you should rethink your Git commits where I explain the benefits of having a readable Git history.

I want to go a step further and show you how to have complete control over your Git history — rewrite it, keep a linear project history and integrate upstream changes.

I find most explanations confusing because they spend time explaining features instead of showing you how to use the feature. That’s why I encourage you to practice what you read.

Initialize a Git repository inside an empty folder:

Set your code editor as the default Git editor:

Learn more from the VS Code as Git Editor documentation. If you are using another editor you can see a list of configuration commands.

We are using the Git Graph VS Code extension to get a visual representation of our Git history.

What is Git Rebase?

Git rebase specializes in integrating changes from one branch to another:

This is a contrived example for sake of learning. We’re not going to write actual code.

We’re tasked to add a feature to display a list of Pokemon. The steps required include:

Your terminal and editor indicate you’re on the right branch: 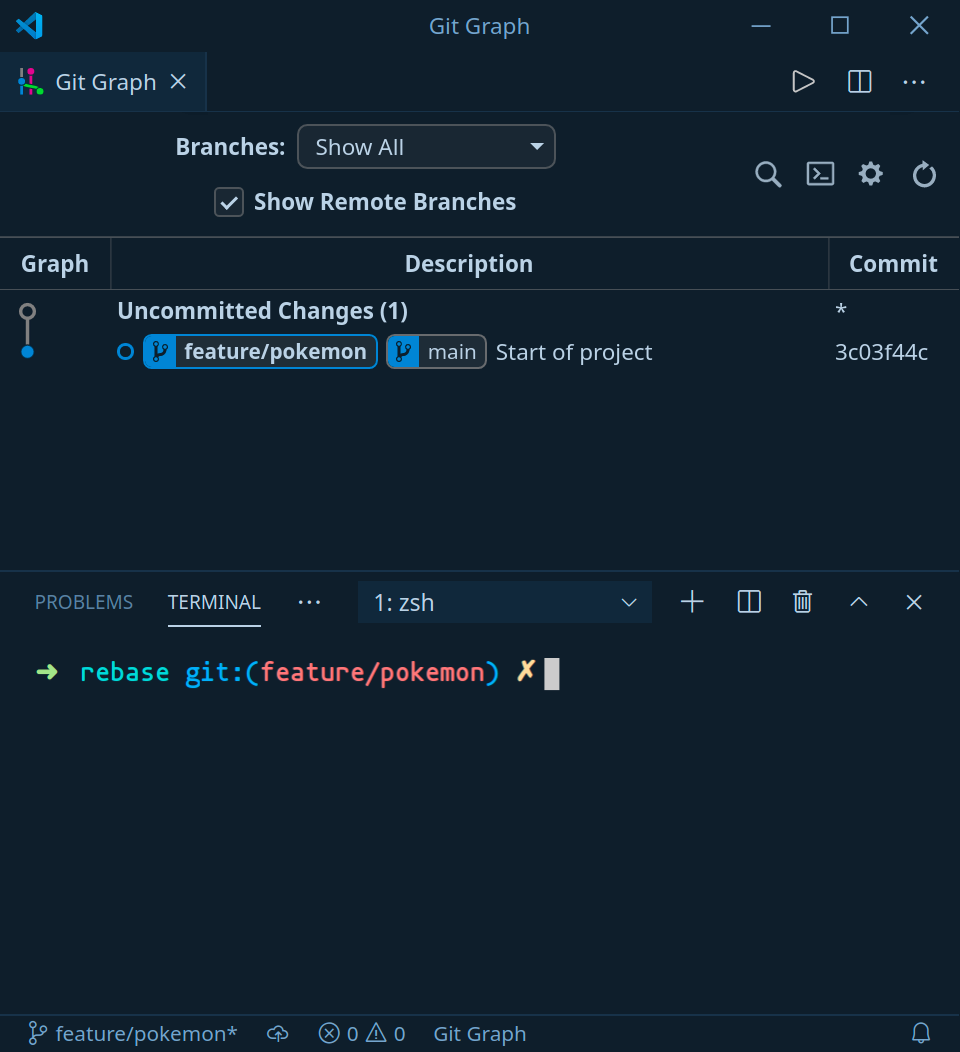 Stage and commit the file:

Do the same for styles.css:

At this stage, we could do git checkout main and git merge feature/pokemon to merge the changes.

If we merged the changes:

If you’re playing around and make a mistake you can always do git reset --hard fd9eb317 which would bring you back in Git history. Your commit hash would be different.

After we’re done merging the changes we should remove the branch with git branch -d feature/pokemon since we no longer need it (you will have to repeat the previous steps if you do it).

Instead of using merge, let us use interactive rebase.

This gives us the ability to alter and even reorder our commits if we wanted to:

Let’s take a look at the Git log so we understand what we want to accomplish:

Wouldn’t it be nicer if we could have only one feature commit that includes everything we have done? This is possible with rebase.

Let’s go back to our branch using git checkout feature/pokemon and start the rebase:

The -i command-line parameter says: “run rebase in interactive mode”. The HEAD~2 specifies the last two commits in our Git history. 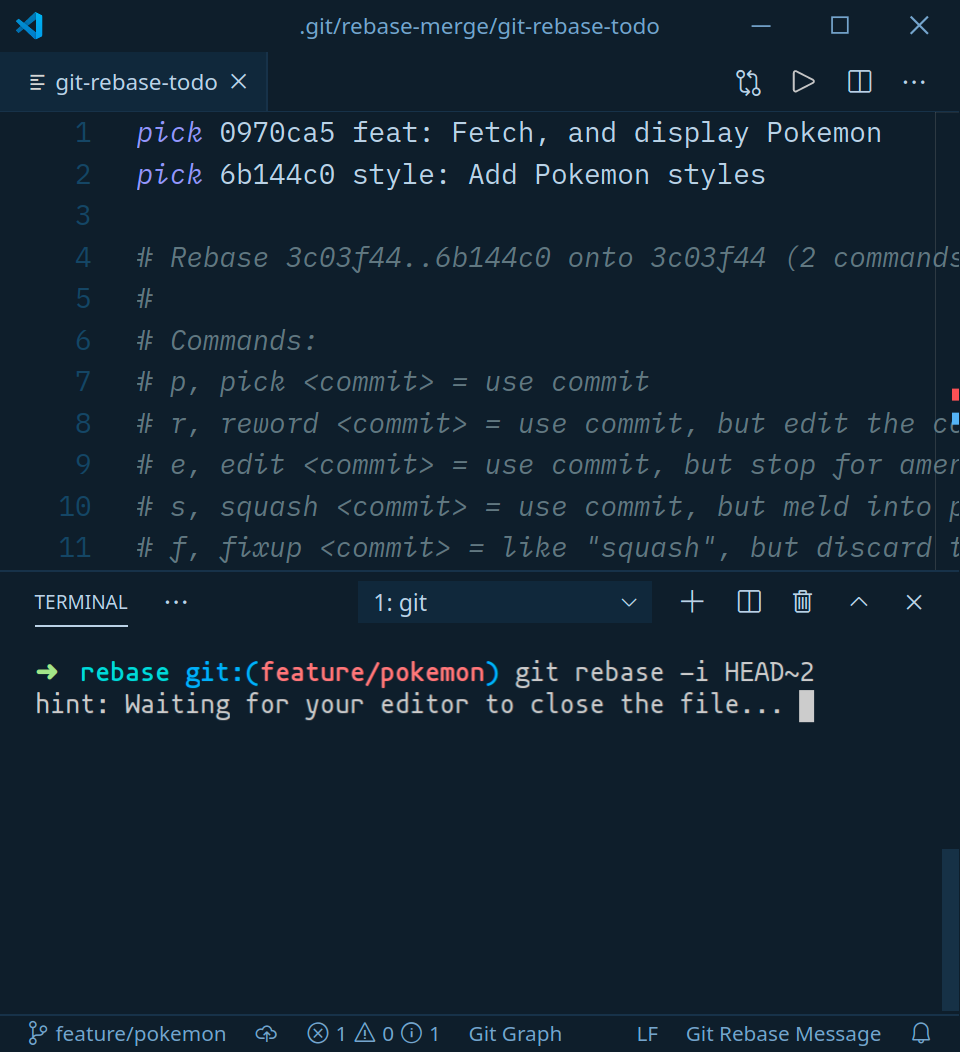 You can ignore most of the output unless you want to read it. What’s important are our commits at the top.

The most useful thing to us is:

Let’s take a look at the top of the file:

When squashing you leave the top commit alone. We change “pick” to “squash” for others, or use the abbreviation:

After you’re done save the file and close it. Another file is going to open. This is where we change the commit message. 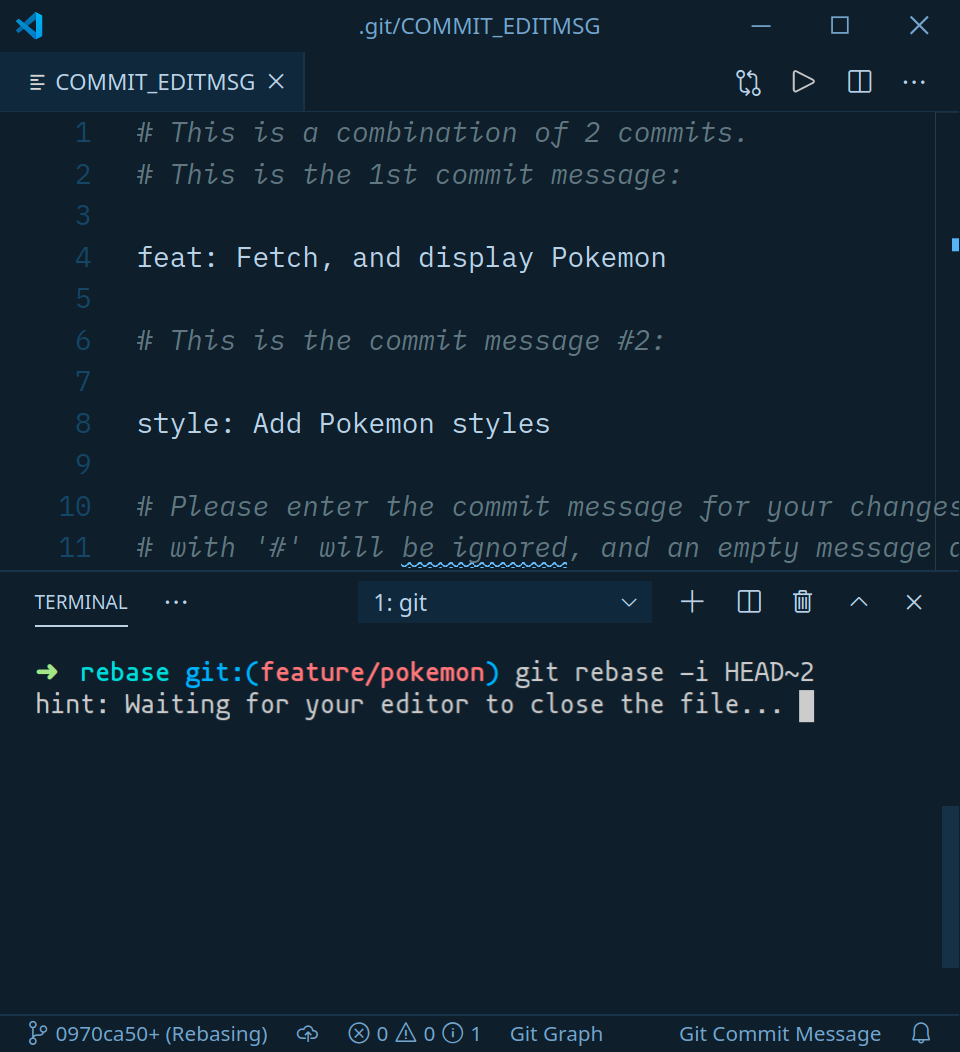 We can delete most of it and enter our commit message. Close it after you’re done. 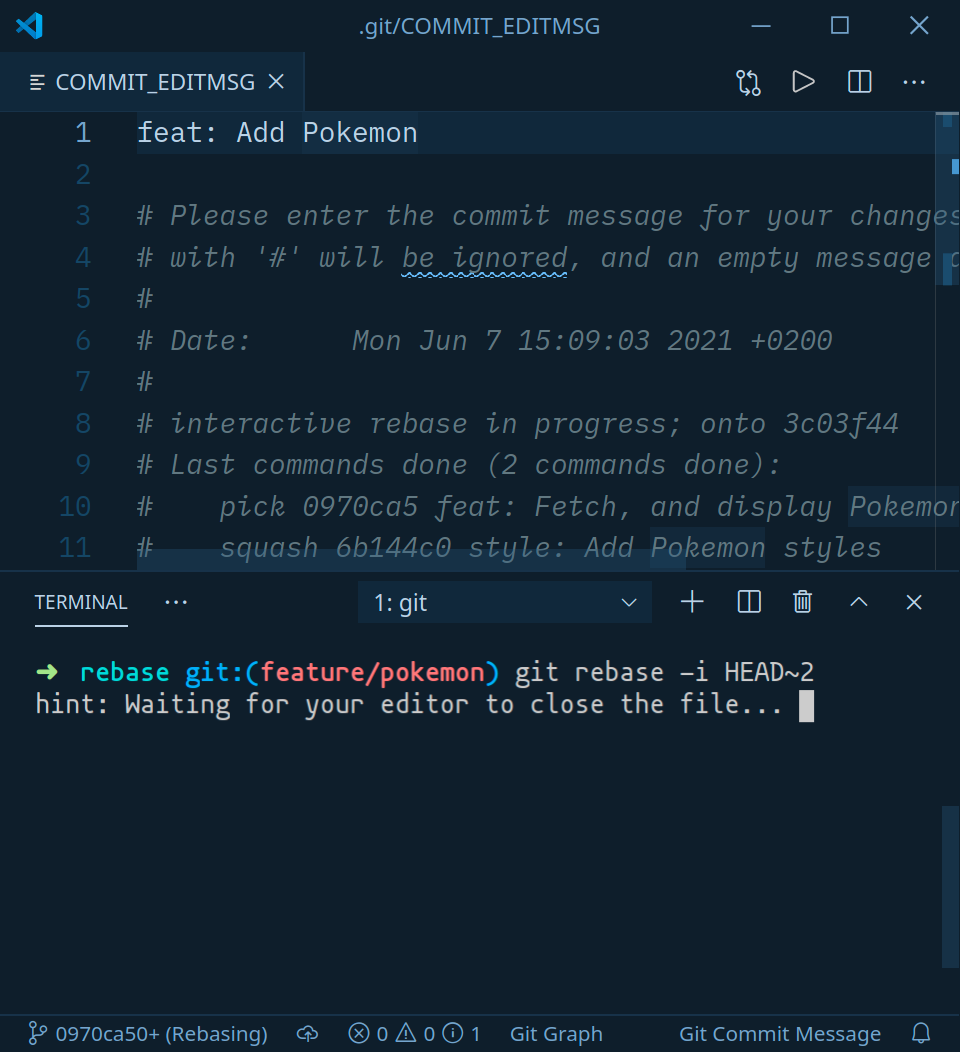 If we change our mind we can Ctrl + C to stop what we’re doing. We can stop the rebase at any point with git rebase --abort. After resolving any conflicts we use git rebase --continue.

We are still on the feature/pokemon branch so let’s git checkout main.

The only thing left to do is rebase the changes:

That’s it. Rebase is one of my favorite Git features. It’s very powerful since it let’s us have a Git History we can reason about.

Note that if you’re working with a remote branch and want to push changes you have to force push the changes with git push -f (to your branch only) which is fine if you read the next section. You can push your branch with git push origin feature/pokemon.

When Not to Use Rebase

Using Rebase to Keep Your Branch Up To Date

Let’s say we’re working on the Pokemon feature. Our crack team of backend developers is working hard on implementing the API. Since it’s not ready we had to use a mock API during the development of the feature.

At one point our feature branch is going to get behind our main branch:

The above example shows how the “feat: Add Pokemon API” commit was pushed to our main branch meaning our feature branch is behind.

How do we base our changes on the latest commit?

If we’re on the feature/pokemon branch we can do a manual rebase:

If the branch is remote you also have to remove it from GitHub.

You can always go back in time if you make a mistake. That includes altering the Git history. It only appears your old commits are gone. They’re not. You can restore and even undo the rebase with Git reflog.

Thank you for reading and have a nice day!